The president told governors earlier that many of them were appearing “weak”.

WASHINGTON, DC - MAY 15: U.S. President Donald Trump speaks to reporters before boarding Marine One on the South Lawn of the White House on May 15, 2020 in Washington, DC. President Trump is spending the weekend at Camp David in Maryland. (Photo by Drew Angerer/Getty Images)
by Dominique Noelle June 1, 2020

National Guard troops were deployed near the White House Monday evening hours after President Donald Trump said he wanted a military show of force against violent protests gripping the nation.

The area outside the White House looks like a warzone right now pic.twitter.com/MgoUnrPh6l 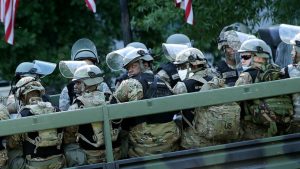 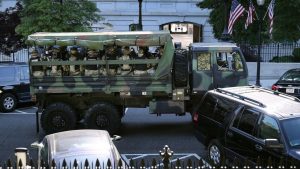 The unrest has been the most widespread in the United States since 1968, when cities went up in flames over the slaying of civil rights icon Martin Luther King Jr., and rekindled memories of 1992 riots in Los Angeles after police were acquitted in the brutal beating of black motorist Rodney King.